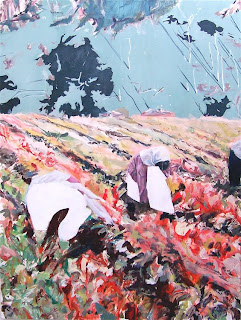 I have a website now!
plasticforest.com
Recently I've been disconnected from the internet which is okay because I get to watch movies from the sixties and make collages.
I've also been interning at this sweet gallery called FIVEten on 9th and Broadway (downtown Oakland). They have some sweet products by local designers and fine art shows. Go there for your fashionable holiday shopping. I'm there most Fridays if you want to hang out. And it's right next to the Downtown Oakland Farmers Market! Hella cheap veggies. They have exotic dates on the branch and thai eggplants (round eggplant!) and cashew sorbet. Do it.
I have another painting to add to the site and i hope to complete at least one more before the semester ends.
And I will be having an upcoming group show in January (the reception on the 2nd with all the other first friday openings) at this restaurant/bar in a big lofty space called Mua on webster (where webster and Broadway meet at 25th) in downtown Oakland. It's curated by this wonderful person named Petra. She's got a gallery called Maniac on 17th and Franklin- a block from Broadway.
Posted by jes`si`ca. at 7:51 PM No comments: